The Coalition Culture and Creative Industries in Germany (k3d) is an open alliance of leading private-sector interest groups - it sees itself as a competent mouthpiece of the key industry for social and economic change.

As an agile initiator for politics and government at federal, state and EU level, it develops overarching positions, statements, and demands on cultural, media and economic policy issues.

The actors of the cultural and creative industries (CCIs) represented by the coalition's associations are the relevant engine for creativity, innovation, productivity, and economic growth in Germany and at the same time a guarantor for democracy, diversity and social cohesion.

On 6 July 2021, the Coalition Cultural and Creative Industries in Germany (k3d) was presented to the public for the first time at the "Workshop of the Future" conference: In her keynote speech, Commission President Ursula von der Leyen highlighted k3d as a perfect example of the interdisciplinary networking of culture, crafts and technology, which will succeed in combining innovation with culture not only in the context of the NEW EUROPEAN BAUHAUS initiative.
The German culture and creative industries (CCIs) are one of the most powerful economic sectors in Germany.
With a gross value added of 106 billion euros in 2019, it contributes 3.1 per cent to the national economic output (GDP) and is thus the third largest economic sector in the country after the automotive industry and mechanical engineering.
Monitoring Report on the Cultural and Creative Industries of the BMWi of the Year 2020
At the European level, the CCI generated a turnover of 643 billion euro and a total value added of 253 billion euro in 2019.
This means that the core activities of the CCI account for 4.4 per cent of the EU's GDP in terms of total turnover. Their economic contribution is greater than that of the telecommunications, high-tech, pharmaceutical, or automotive industries. At the end of 2019, more than 7.6 million people in the 28 EU countries were employed in the CCI. About 700,000 (+10 per cent) jobs have been created since 2013, including for authors, performers, and other creative professionals.
Rebuilding Europe - The Cultural and Creative Industries before and after COVID-19
The industry stands for creativity, innovation, productivity, and economic growth like hardly any other, and is a driving force and designer of many other sectors of the economy.
As a driver of economic and social transformation, it is a matter of course for the sector to actively shape the digitization of society. The eleven sub-sectors (music industry, book and art market, film and broadcasting industry, performing arts, design industry, architecture market, press and advertising market and software/games industry) are closely interlinked and shape our society. The CCI in its entirety is of outstanding importance for democracy, social cohesion and the diversity of our country as well as the different value chains, which must be solidified in a common understanding of economic and social interrelationships.
The prospering sector of the economy has so far lacked a competent common point of contact in the public structures that understands and promotes CCIs and their services and potentials, as well as records and addresses their specific needs.
This has become particularly evident during the pandemic: The responsibilities in the Federal Ministry of Economics and Technology (BMWi) and the Minister of State for Culture and Media (BKM) or the federal states are not sufficiently structured to react appropriately to crisis situations and economic requirements and to create an economic and social climate that is sufficiently supportive of CCIs.

In the wake of the pandemic, relevant industry players have now joined forces. This is in the belief that they want to ensure the visibility of the industry and be its political contact even beyond the pandemic. The coalition also sees itself as an alliance that clarifies the relevance of this economic sector in the public perception and communicates it to society. In this context, the heterogeneity of the CCIs is not an obstacle, but rather the challenge of agreeing on the broad lines, bringing them together and representing them jointly.

The k3d is borne by the understanding that it also exchanges information with other market participants and thus reflects the view of the industry players as a whole, depending on the situation. It has no fixed association structure and does not aspire to the position of an umbrella organisation. Rather, common issues are jointly presented to the outside world, with each association primarily representing the interests of its members and speaking on their behalf.

The initiators of k3d come from the audio-visual industry, book, design, galleries, press, fashion, music and cultural event industries and are currently represented by the following associations: 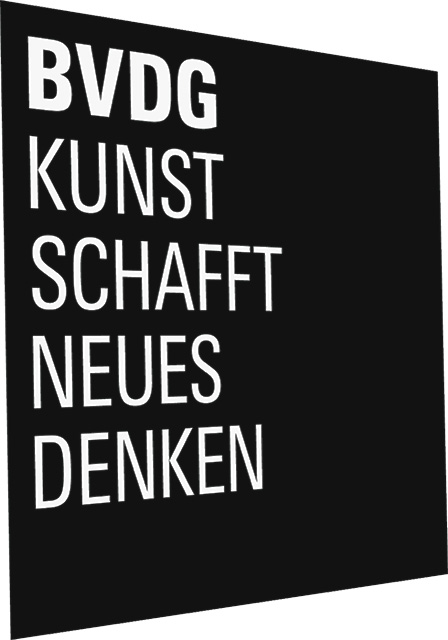 The coalition can be reached at the e-mail address kontakt@k3-d.org - depending on the request, one of the coalition partners will take over the answer in coordination with the other alliance members.

This text is also available as PDF